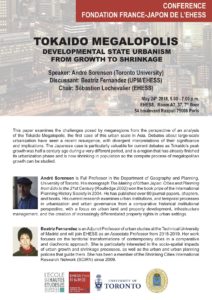 This talk will examine the challenges posed by megaregions from the perspective of an analysis of the Tokaido Megalopolis, the first case of this urban scale in Asia. Debates about large-scale urbanization have seen a recent resurgence, with divergent interpretations of their significance and implications. This paper contributes to these debates from the perspective of the case of Japan, which is surprisingly absent from recent discussions which have focused primarily on the U.S., Europe, and China. When first identified as a ‘megalopolis’ in the 1960s the Japanese Tokaido region from Tokyo to Osaka was already larger and denser in population than the north-east seabord of the US, and was growing much faster. The Japanese case is particularly valuable for current debates as Tokaido’s peak growth was half a century ago during a very different period, and is a region that has already finished its urbanization phase and is now shrinking in population so the compete process of megalopolitan growth can be studied.